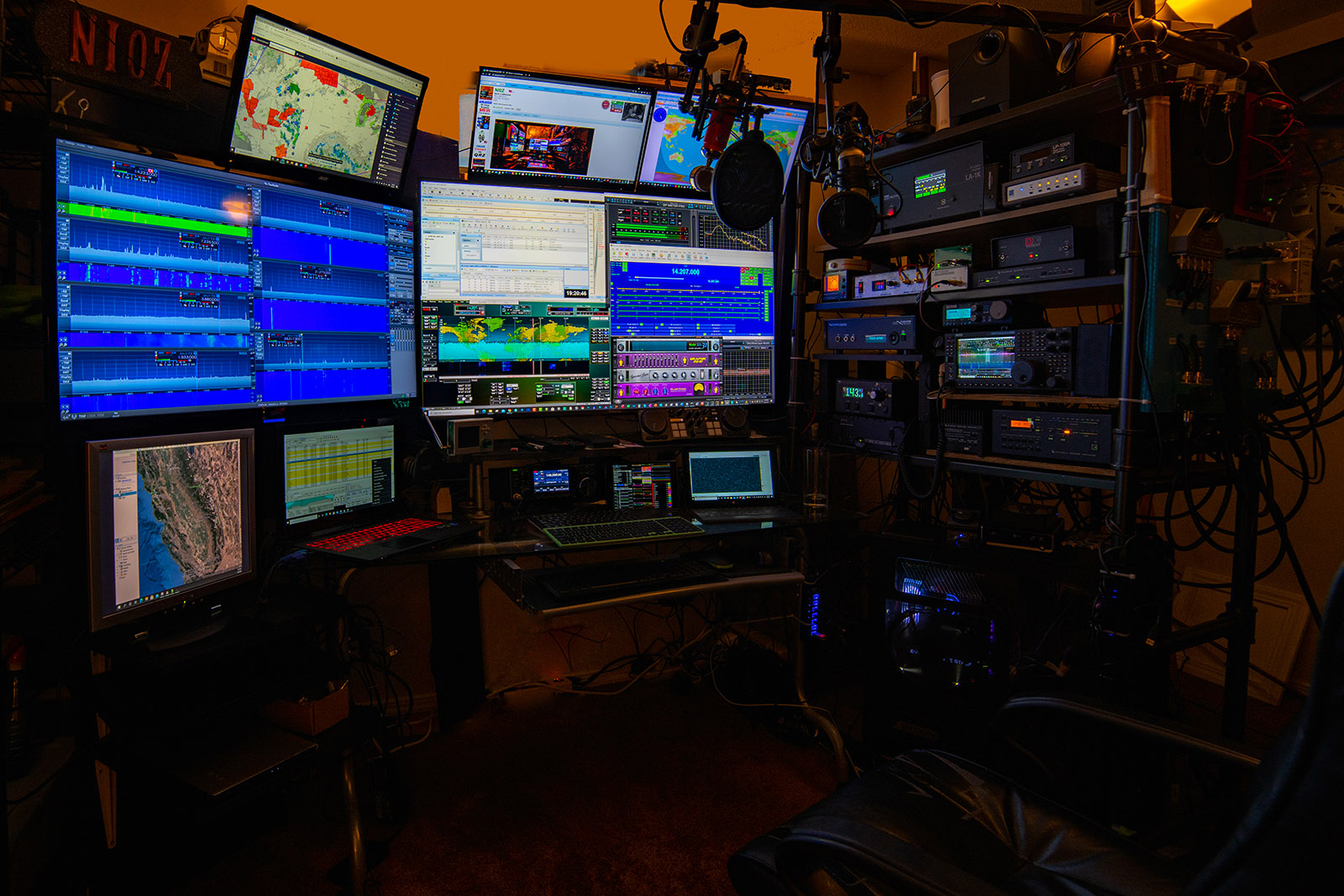 It's been so long since I last blogged! So, while working on the last 25% of the shack rebuild, I started working on some new shack diagrams!  The shack diagrams got me to thinking it was time to start sharing again!

So I will say up front that many of you may like the old shack visually more than the new shack.   That's ok, I wont be offended! :)

I have been rebuilding the shack from the ground up again, everything was pulled apart, set aside, a new shelf built, and the shack slowly reassembled. New RF routing cables have been purchased (LMR 400), Cat 6 Lan Cabling, Hamzilla was refreshed not to long ago. I added more computers and new radios such as an Anan 7000DLE MKII Black, a Flex 6700, an ICOM IC-9700, a second higher power Palstar HF solid state Amp, a new clean power power supply, new 50 inch screen, back drop construction and more.  Also ahead are several small SDRs to explore above VHF such as a Hack RF with Porta Pack Mayhem, Pluto +, RX-888 MKII.

This go around I wanted to clean things up more. What do I mean?  Well, for one better positioning of the radios and accessories. Next was better monitor placement and more screen real-estate. Cleaner use of offboard audio and microphones. Overall smarter deployment, reduction of complexity, and cleaner cabling. Finally better attention to detail and less corner cutting.

So this set of posts when finished will have covered great deal of what I did with diagrams, pictures, explanations, and rationale for the decisions. Don't get me wrong, I have had lots of lessons learned along the way, rework, issues, and hopefully solutions. So lets dig in now and step through it all!

A shack this complex requires some real thought and work.  Getting 4 or more HF radios with two antennas and 3 amps is crazy business!  Then there is thoughts on compute resources as well as display resources.  How to get it all to work without making a huge mess was the challenge.  Then there was also the VHF/UHF rig to squeeze in as well.

As far as Antenna Switching for the most part I had already done most of the work in Shack V10.   I did want to clean it up more so i went with a board and then cleaned everything up with new cables.

Conpute resources always relied on one super computer for the most part.  Late in the game I changed that and decided to use some dedicated devices for certain tasks such as Skimming to lighten the load on Hamzilla.  Hamzilla will process the IQ from the radios and serve as the master server.   Hamzilla is an I9 with 28 logical processors and 14 cores.  It also drives 4 of the shacks 8 displays. I had 3 older laptops around and put them to use.  An old MS Surface Pro I5 processor for the skimmer and has its own screen.  Its only job is to act as the skimmer.  An old I7 Lenovo serves as the spot collector and plotting server.  It drives 2 screens, one being its own and the other being an older 1280 x1024 display. Another I7 Lenovo will serve as a general compute device handling whatever else I want to offload and drives an external screen with the lid shut.

While the larger baker style racks were nice, they left a lot to be desired as far as sitting equipment on this without adding boards underneath. While the shelf heights were adjustable, I still didn't like how the equipment laid out on the rack. So, I bought an even sturdier but less flexible shelf. That said though it is really nice and has nice unbending surfaces to set the equipment on. I ended making two add on shelfs to get a nice layout for the equipment. For me the result is very satisfying! As you can see, everything fits just right with little space to spare. 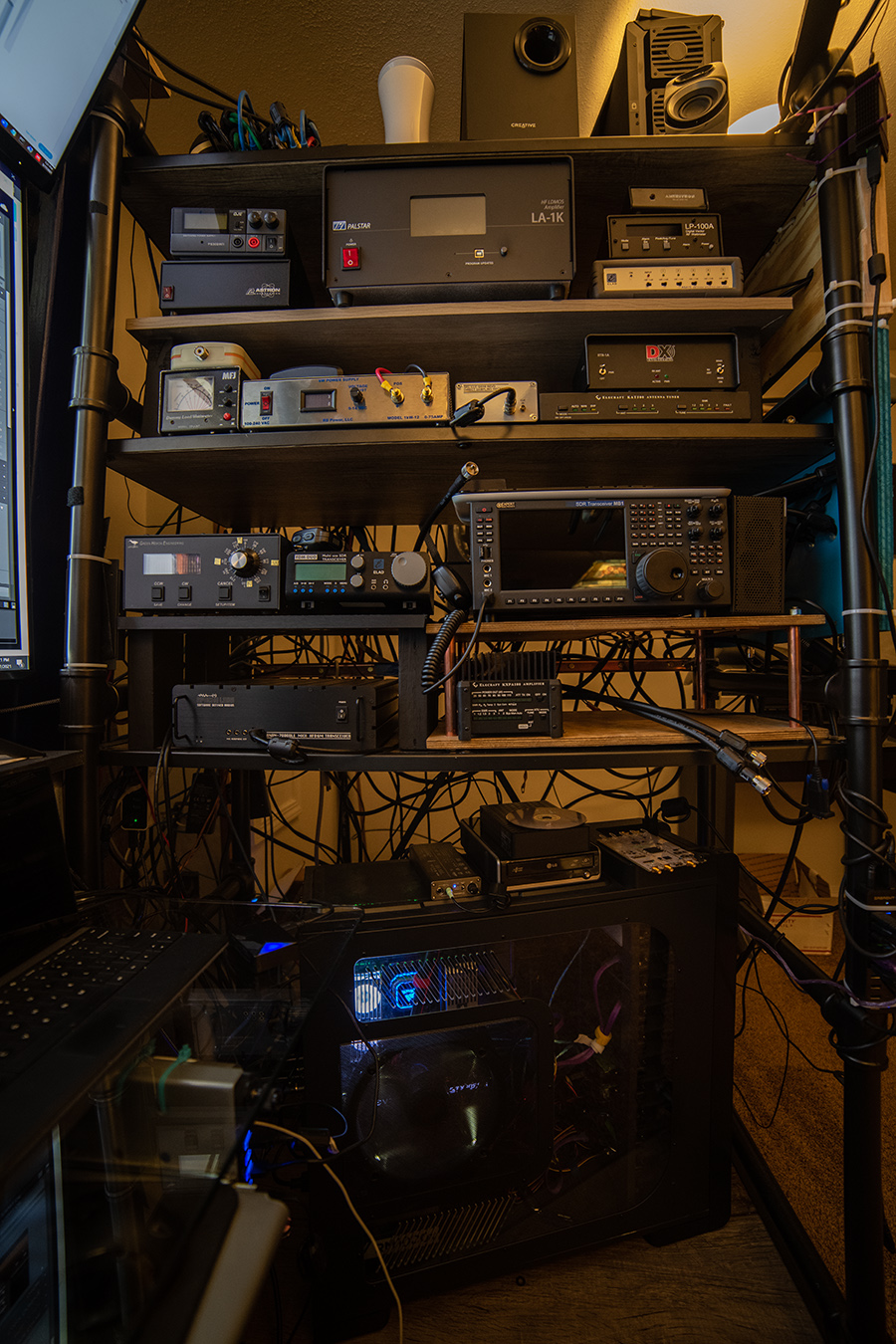 The second from the bottom shelf was left off deliberately to accommodate Hamzilla, I made and added some sub shelves to neaten the layout of equipment.

Lets talk about the back drop next. So I wanted to have two hanging monitors up top with a downward tilt, not unlike you will see in monitoring centers. This would require some sturdy support to pull it off. I built two brace structures from 2x4's and then used another 2x4 as a crossbeam/slash offboard audio processing shelf. Then to help brace it and also provide more real-estate for monitors, I added a side panel to the left side. You may recall in version 10 of the shack I had two racks either side. I didn’t want to feel so caged in and also wanted a better way to hang my old 38inch screen. This would also provide for a better viewing angle as well as get rid of that caged feeling. All of the supporting structure was painted in dark blue and black. I cut out a notch on the side panel so it could cradle the desk at an angle. 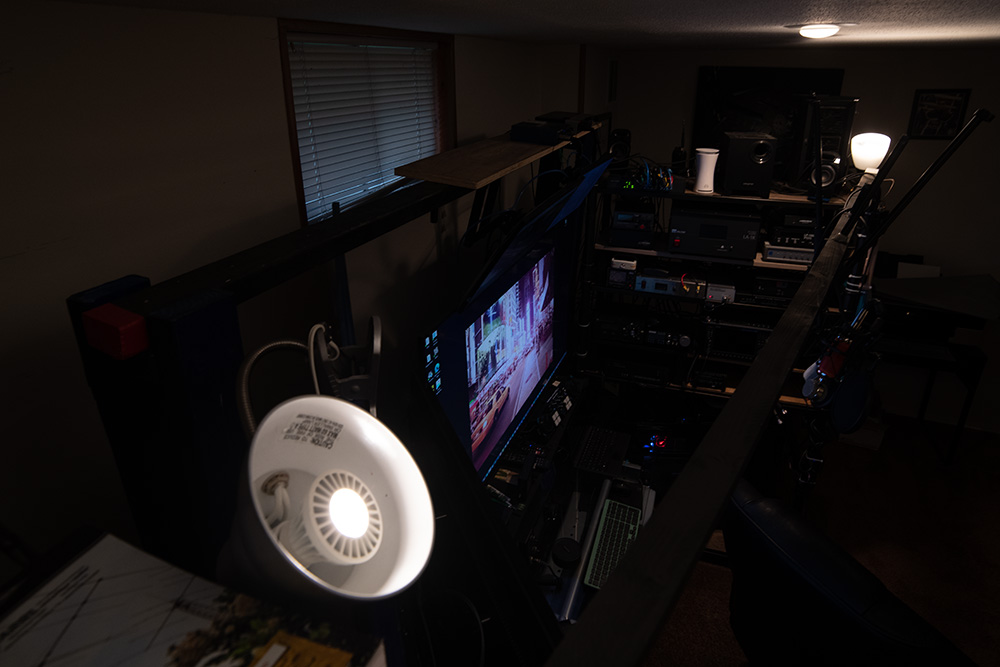 Note the left side and red tipped beam that sits between two 2x4's.

Next up was cabling and I must confess that a setup like this has close to 100 cables. No Joke! Taking in power cables alone in to consideration you're looking already at 30 separate devices ranging from 5V DC to 120V AC you can easily add that again to connect the devices together. Then there are lots of devices that have 2-4 other connections via RF Cables for Antennas, and interconnecting switches, USB Cables (Elad DUO has 3 USB Cables all by itself), RCA jack Keying lines. Well, now that I start adding them up, there are well over 100 cables. I wanted it to be cleaner, and to be honest, achieved little in this regard. 110-120 cables is exactly that, spaghetti dish made up of cables! Where I did make some progress was in refreshing lots of the cables for higher performance as well as eliminating the need for physical audio cables that I used on V10. I also tried to put power strips in areas where they would be most useful. The same for USB Hubs.  There are 20 USB connections spread across 5 powered hubs. 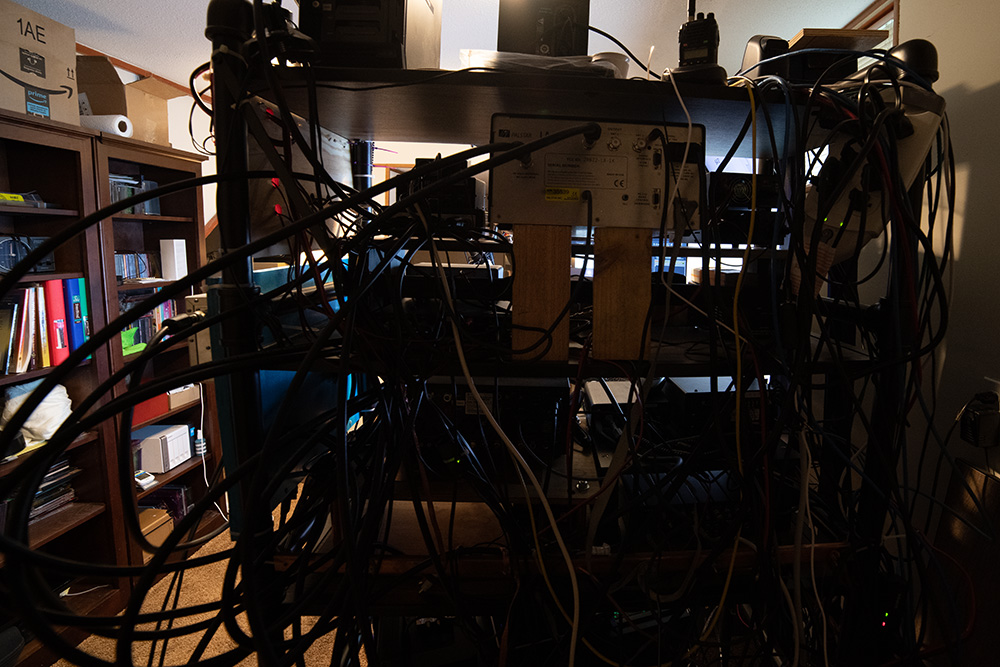 I am sure this may disgust some folks, however, 130 cables is 130 cables.  There are some rules I have developed about cables also, this was learnt the hard way in fast generations.  Why not Zip Tie these and make them look neater?   Ahhh, because you really don’t want RF carrying coax to touch other cables if you can avoid it.  You also don’t want to bundle cables because they may end up radiating other cables and injecting RF into your computers, keyboards, mice, ect.  Why not use Shorter RF Coax for the connections.  Same reasons, its much easier to fan them out a little more than have them all tightly and closely creating a glob of RF radiating from them.  You may also note the liberal use of ferrites as well.

This switching system uses fewer COAX Switches than previous shack versions, despite having added an additional amplifier.  The two blue switches match the AMP Ins and Outs together.   More labeling to come to neaten it up more.  You can see I also tidied up the power cabling.  What you don’t see is there is another power hub on the other side of the shelf.  I am using 3 different Power Supplies to make sure the radios all have enough power.

The drawings below should help show the cable challenges. 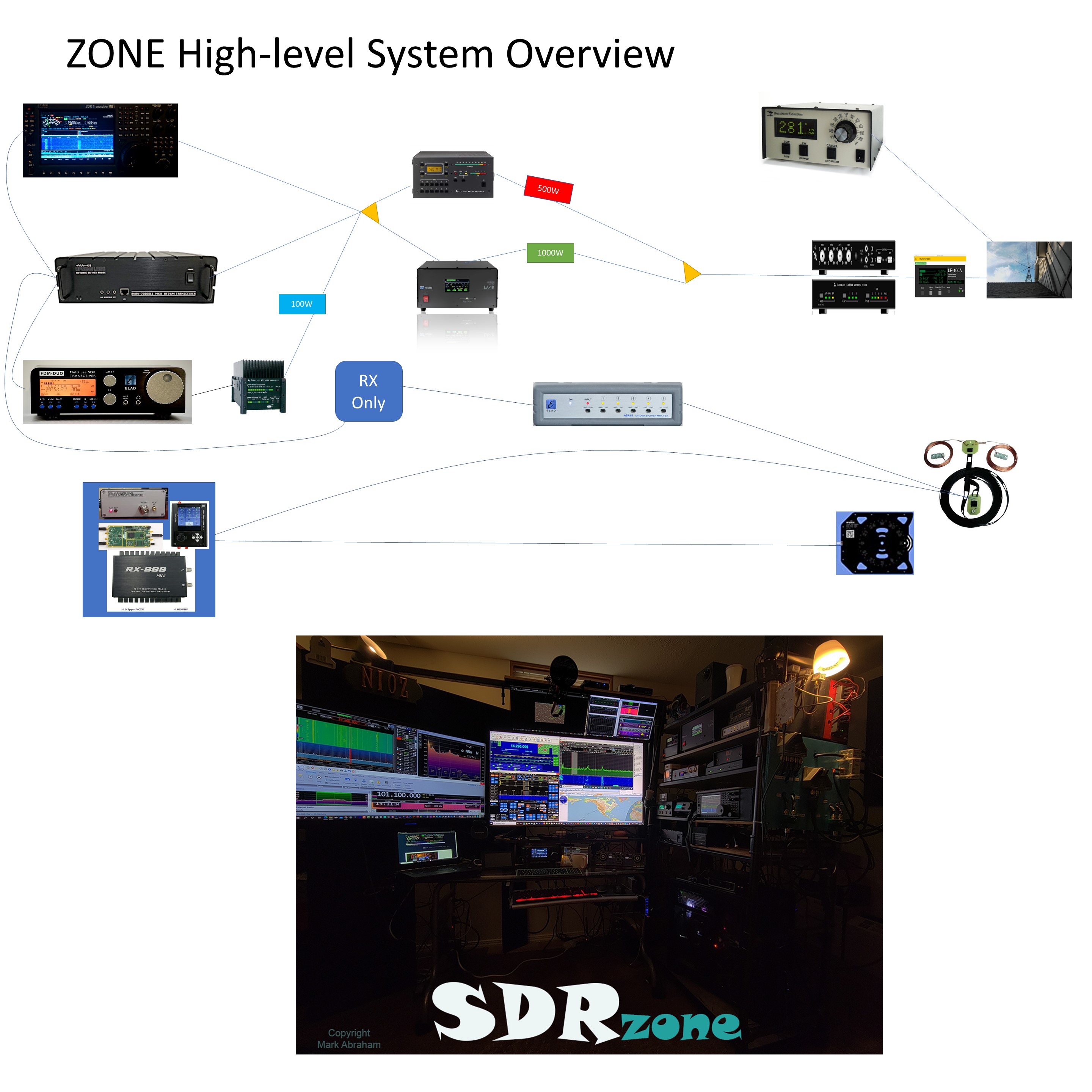 The first diagram is more of a system overview.  It helps reflect the end resulting flow of connectivity through the shack and how the systems are all linked together at a high-level.  Keep in mind, there are no finished shack picks yet! 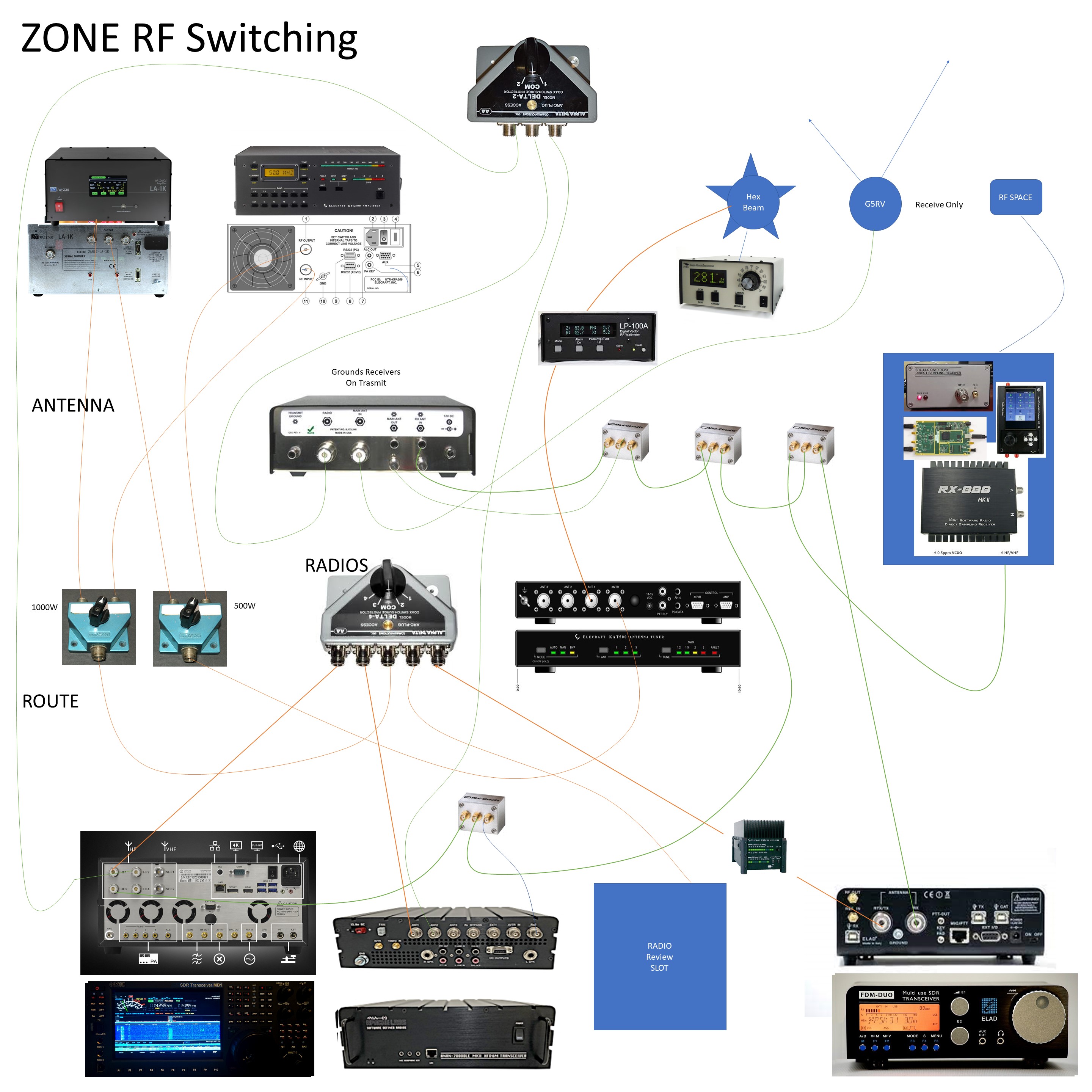 The RF Switching Diagram is always a hoot!  It takes some work to not make it look like a plate of spaghetti.  Also not included here is a signal splitter/amp made by Elad that allows me to feed the receive only antenna to the radios. As noted in the Diagram the DX Engineering RTR 1A protects the receive antenna and radios by grounding receive on any radio transmitting. 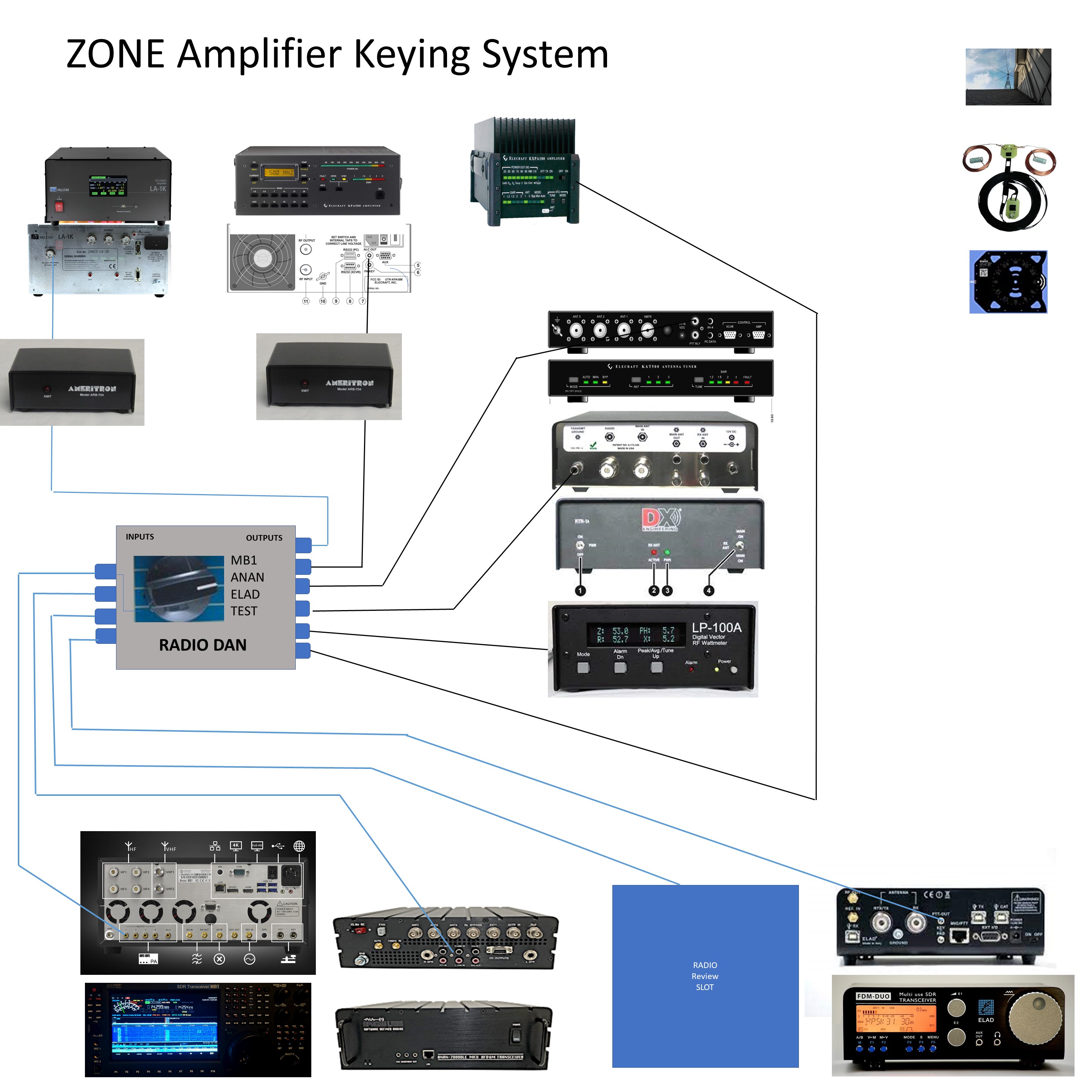 I won’t lie, there is a bit of overkill in this one, however, I prefer to just be extra sure with the AB 704's protecting the Amps.  I never had an issue until I started operating without one and then my KPA 500 took a hit.  Radio Dan's box has not arrived yet at the time of writing this post and is just a mashup to symbolically illustrate its role in the overall setup. 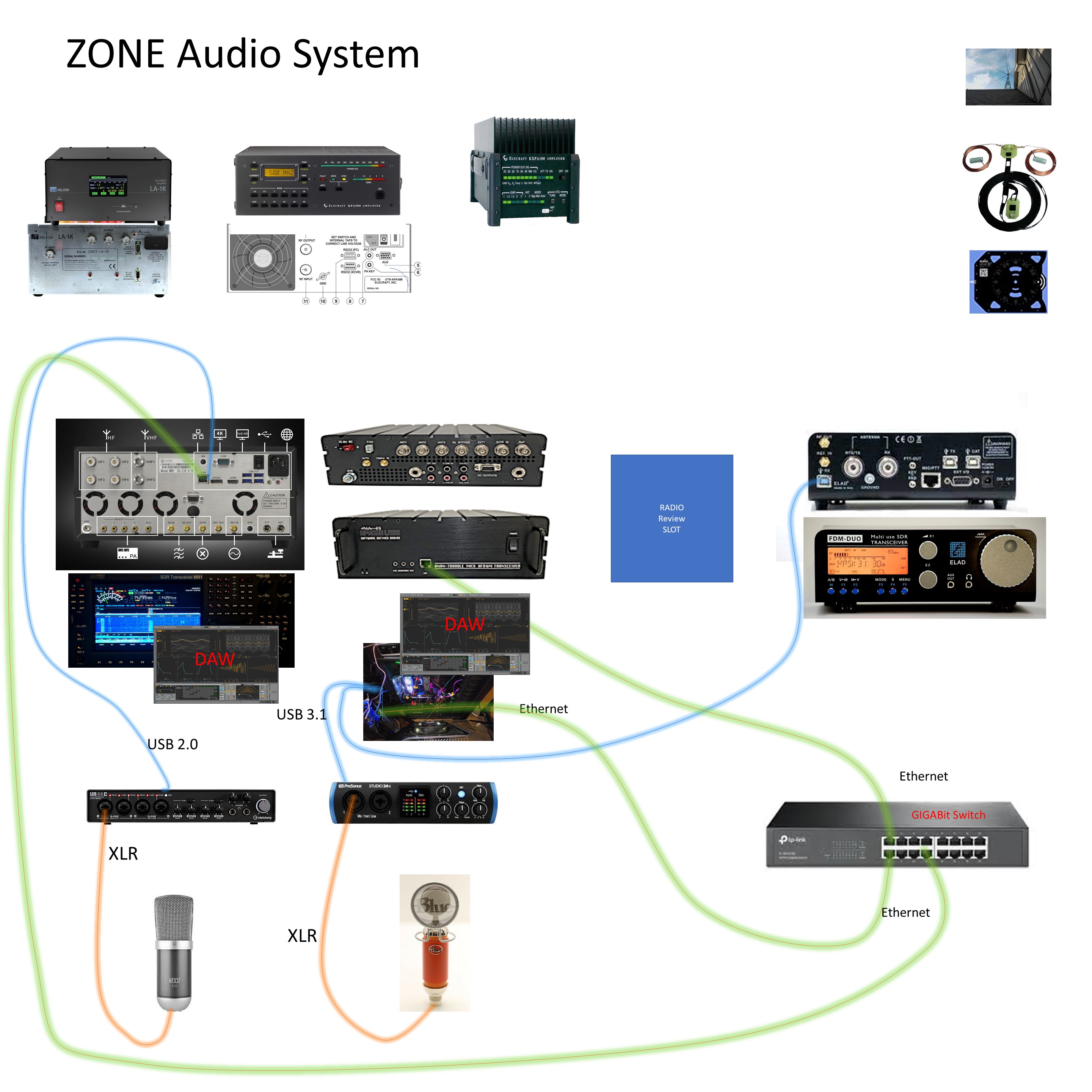 The audio setup in V11 has removed as many physical audio devices and cables as possible and now just allows the SDR software to reference the DAW Software output for either processed or unprocessed audio.  This greatly reduces the possibilities for hum and static and or need for ground loop Isolators.  Essential the microphone is hooked to the audio device which in turn is connected to the computer via highspeed USB.  The software on the PC allows the use of effects plugins to process voice and send it to the radio back through USB to the computer.  The radio is connected to the PC and received the audio via VAC Audio cables.  The software sync the 10ms latency for this loop to avoid issues.

The overhead mics are a love hate deal.  I don’t like mics on stands sitting on the desktop and long articulating arms have a tendency to get into my screen real-estate.   Hence overhead it has been the last two times.  I have some tweaking to do on this version, I want them to be adjustable, so they are up high when not needed, and lowered to a more appropriate level when in use.

To be continued in my next installment.